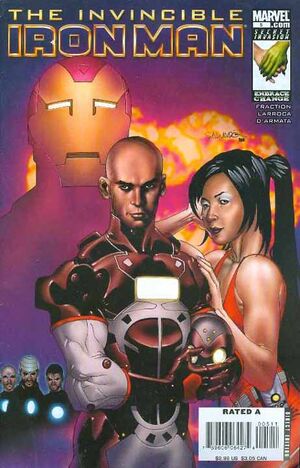 Billionaire playboy and genius industrialist Tony Stark was kidnapped during a routine weapons test. His captors attempted to force him to build a weapon of mass destruction. Instead he created a powered suit of armor that saved his life. From that day on, he used the suit to protect the world as the invincible Avenger Iron Man.

With the help of Doctor Doom, Iron Man contained Madame Masque in an energy bubble. Until she took over Doctor Doom and paralyzed him and tried to take control of his suit. That is, until Mary Jane knocked her out with a microphone stand. It turns out Madame Masque is possessed by a demon. Tony puts his suit on her and Doom tried to pull the demon out. The blast from removing the demon and saving Whitney Frost. Tony was knocked out and woke to find Doctor Strange hovering above the scene and Doom long gone.

Doctor Strange took Whitney Frost’s body to help heal her metaphysical self. Tony thanks him and Strange says he had to. They are “awesome facial hair bros.”

3 Days Later: Mary Jane is pondering her woes when Tony sits down beside her. He offers her a job organizing the life of Tony Stark. TO BE CONTINUED…

The awesome facial hair bros. I love it! This is such a fun comic. It is a little adult oriented, which I love. It is funny and witty and I love the comic art style. Next issue should have The War Machine in it. I can’t wait! Until next time!