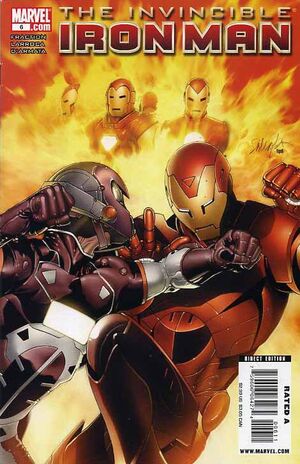 “Billionaire playboy and genius industrialist Tony Stark was kidnapped during a routine weapons test. His captors attempted to force him to build a weapon of mass destruction. Instead he created a powered suit of armor that saved his life. From that day on, he used the suit to protect the world as the invincible Avenger Iron Man.

Stark Tower. Osaka, Japan. Iron Man is investigating Madame Masque’s break-in and is still trying to figure out what she stole. And by he is investigating, we mean he made WarMachine, aka James “Rhodey” Rhodes, do it. What is Iron Man doing that is so important? Amara Perera.

Tony took her out for a nice breakfast and they were interrupted by Doctor Doom, who just pulled up a chair like he owned the joint or was invited (he doesn’t and he wasn’t). Meanwhile, we see Rhodey is following up with a friend of his to figure out who the biohack ninjas were and who sent them. Instead he meets a really big guy…
Meanwhile, back at the most awkward breakfast date ever, Doctor Doom is grilling Tony on if he has had any weird encounters or had any weird dreams in order to follow up from their attack on the demon trying to enter their dimension. Tony still doesn’t believe Doom is going good.

Back to Rhodey, the big guy left the club and got into his sweet ride with two hot mamas. Rhodey gives them a lift and finds out the ladies are the real threat, not the big dude. The ladies hold glowing ninja swords (can we say lightsabers Marvel?) at his throat. TO BE CONTINUED…

I am finding it harder to believe Doom is going good. He is working some angle. Maybe he knows the results of Civil War? As for the ninjas with the lightsabers, I have no idea what is going on there, but it is fun. Way to call Rhodey out on being sexist by dismissing the ladies. He even said they were excused. Wow. Until next time!