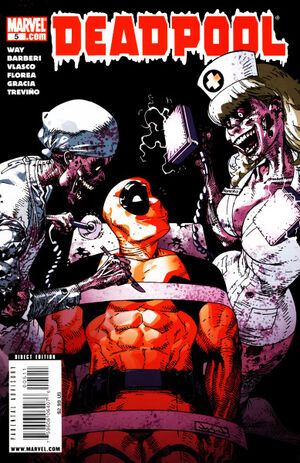 Deadpool discovered that the one dressing up as him and framing him for murders was none other than his own employee, Madcap. Madcap is living up to his name and is jealous of Deadpool’s life and wants to ruin it. With the help of his Mercs for Money (Slapstick, Solo, Stingray, Foolkiller, and Terror) and the Uncanny Avengers to help stop Madcap.

Deadpool uses his own lovely daughter (omg she is cute as a button!!), Ellie, as bait to lure out Madcap. When Madcap shows up, Quicksilver grabs Ellie and runs. He drops her off on the Jersey border where Steve Rogers and her mom, Preston, are waiting. Ellie proudly announces she got to be chum. Steve Rogers takes them to the safe house.

The Mercs for Money round up all the crazies “booped” by Madcap. Deadpool takes on Madcap and is getting his ass handed to him. Until Masacre showed up and cut Madcap’s head off with his machete. (Yay! 3.1 had a purpose!!) Masacre cut Madcap into little pieces.

Deadpool’s plan is to put the tiny pieces into a glass coffin meant for Namor. Before Madcap could be put in the coffin, he grabbed a weapon from Deadpool’s tool belt, a Chitauri hand cannon that could vaporize him instantly. Madcap turned the gun on himself and went up in a cloud of vapor. After the battle is over, Deadpool is mobbed by reporters and fans. He escapes into the Avengers theatre, declaring he is fine, but ends up destroying his posters as he walks down the hallway. THE END FOR NOW…

I was hoping to see Masacre again. I liked his appearance in 3.1. I hope this isn’t the last Deadpool comic. The back of this issue showed Deadpool 2099 as the next issue. This Deadpool looks like a girl and she wields giant guns. Maybe it is Gwenpool? I am not too find of getting rid of Wade Wilson as Deadpool. I hope they don’t pull a Thor. Ugh. Until next time!