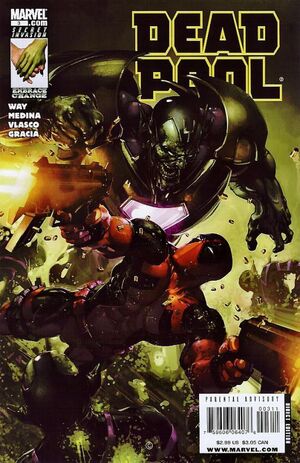 Deadpool is rich and famous and hired a bunch of mercs to work for him. Solo, Slapstick, Madcap, Stingray, Foolkiller, and Terror to be exact. They haven’t been paid in a while and their bank accounts are feeling it. Unknown to them someone is passing himself off as Deadpool and murdering people to hide his deeds. He first killed Deadpool’s old friend Scott Adsit, then he killed the zoning board commissioner.

Deadpool tracks the impostor down and unmasks him. He has some sort of alien, lizard face. He is able to trick the real Deadpool and gets away. Deadpool ponders if he is loosing his touch since Madcap exited his brain. He returns home to find his friend Scott Adsit tied to a chair, beaten, and dead. TO BE CONTINUED…

This comic was too short. I want more. Why are these only released once a month? I have no idea who the alien, lizard guy is or why he is targeting Deadpool. I love the little Deadpool and his recap on the cover. Until next time!