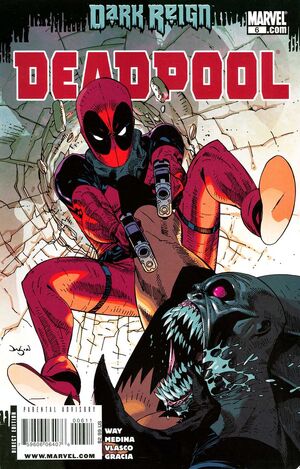 “Avenger… assassin… superstar… smelly person… Possibly the world’s most skilled mercenary. Definitely the world’s most annoying, Wade Wilson was chosen for a top-secret government program that gave him a healing factor allowing him to heal from any wound. Somehow, despite making his money as a gun for hire, Wade has become one of the most beloved “Heroes” in the world. Call him the Merc with the Mouth. Call him the regeneratin’ degenerate. Call him… Deadpool.

We open with a red-hooded person chasing after Deadpool 2099, a female Deadpool. When we do see her, she is riding a mechanical dragon and is being chased by police on flying scooters. NYPD shoots her flyer down and she is rescued by The Bobs. Her minions. They drop her off at home where we see the real Deadpool tied up and watching TV in his bunny slippers. We see that Deadpool 2099 is Deadpool’s daughter, Warda. Warda is the daughter of Wade Wilson and his wife Shiklah. Warda is punishing Wade in order to get information from him. Information on where her mother is.

Meanwhile, the Bobs are dropping a package off to a fuzzy, pink-haired woman. She takes the package and leaves. After she is gone the red-hooded woman shows up and kills the Bobs. She is still hunting Deadpool. They reveal where she is and Red-Hooded lady kills them all. TO BE CONTINUED…

I hate when they jump in time like this. We never know what is going on. All we see is Wade Wilson with his brain scrambled being tortured and mumbling about how Ellie is dead and Preston should remember. It is frustrating. I almost hope Ellie is not dead and she is the Red-Hooded lady. I don’t know. Oh, and the next issue is the 25th Anniversary issue of Deadpool!! Until next time!