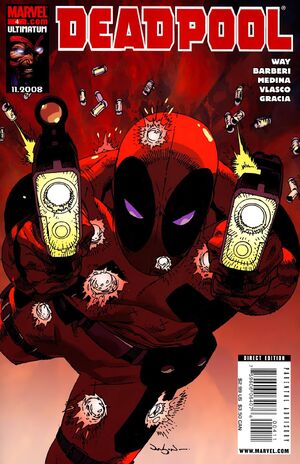 Deadpool hired some dudes to pretend to be him and take missions: Stingray, Slapstick, Solo, Madcap, Terror, and Foolkiller. Funny thing is someone not being paid by Deadpool is dressing up like him and killing people. Deadpool, the real one, set a trap for the fake guy and he was led to the body of his friend Scott Adsit. Adsit was beaten to a literal bloody pulp. Oh, and Lil’ Deadpool mentioned Deadpool tres punto uno and the introduction of Masacre. (Oh, buddy!)

Adsit is happily ALIVE and in the capable hands of Night Nurse. He gets escorted out of there by a large, African American woman carrying a lot of weapons… Emily Preston, Life-Model Decoy of the former S.H.I.E.L.D. agent. We see Mrs. Deadpool exiting Avengers HQ and being accosted by the press. She yells at the press and heads over to her flaming steed and leaves. Not before mentioning she doubts her marriage to Deadpool will last very long so long as he keeps “playing ‘Dress Up’ with his lackeys”. Whom Deadpool is informing they are never to wear his red uniform ever again. So, he had them outfitted in more colorful uniforms. Like deadly Power Rangers.

Deadpool knows who is out to get him and he believes it is Madcap, so with the help of Steve Rogers and the Mercs for Money (he had a cease and desist order from Matt Murdock, hand delivered by Hawkeye, to stop using Mercs for Hire) he is hunting Madcap down. Madcap is getting into peoples’ heads and is handing out Deadpool masks. He wants people to be afraid of Deadpool again. TO BE CONTINUED…

All Deadpool is breaking loose with Madcap on the scene. I love the shout out to Masacre. Deadpool mentioned he was bringing in a friend from down south who was going to help him. I hope it is Masacre. I want to see that. Also, lols on Deadpool stealing the Fantastic Four’s hover car. Awesome. Until next time!