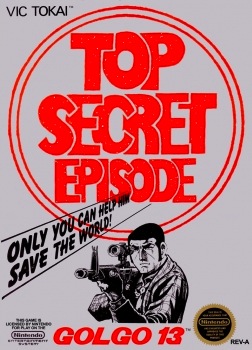 Golgo 13: Top Secret Episode is an action video game for the Nintendo Entertainment System (NES), which was released in 1988.
In this game, based on a popular Japanese manga, the player takes on the role of Golgo 13 (also known as Duke Togo), an assassin whose objective is to destroy the leader of the Drek group. On the way, Golgo 13 must pass through several areas, including East Berlin, Athens, and Alexander Island, which is located off the coast of Antarctica.
It is necessary to navigate and shoot through several mazes in a first-person view in order to proceed through the game, but one maze is a fake base with no way out. The instruction manual contains maps for the mazes.

Growing up Golgo 13: Top Secret Episode was one of the most frustrating games I played. The store was difficult to follow and the mazes were unforgiving. One of the first games that I learned to hate.