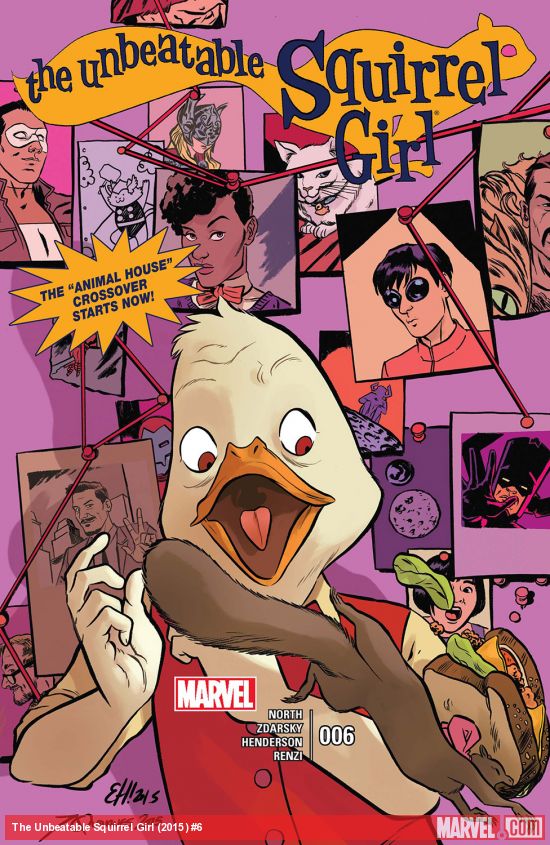 PART ONE OF “ANIMAL HOUSE,” A CROSSOVER WITH HOWARD THE DUCK! Squirrel Girl and Howard will team up against an enemy that neither Squirrel Girl (who has defeated Galactus) or Howard the Duck (who has defeated… uh… well, listen, I’m sure he’s got other qualities) could take down on their own! Will they fight over a trivial misunderstanding? Will they band together against a common enemy? Will Squirrel Girl say “duck!” to mean “lower your head” but Howard will misinterpret it as a call for his attention, leading him to get hit on the head by something? At least ONE of those three questions will be answered with a “yes” in this issue! CONCLUDED NEXT MONTH IN HOWARD THE DUCK #6!

Now that theDoctor Doom Story seems to be finished, we are starting a special cross over story with Howard the Duck and I have to admit that I didn’t find this issue as good as some of the last.
I felt like I was expected to know who Howard the Duck, Kraven the Hunter or one of the others introduced this issue are. However being that I don’t know who theya re I felt a bit lost. Hopefully the 2nd part of the story arc (running in Howard the Duck #6, which I will not be reading) will explain things a bit.

Until next time, keep reading.