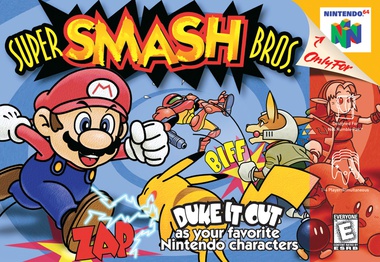 The game includes twelve playable characters originating from popular Nintendo franchises. Characters have recognizable moves derived from their original series, such as Samus’s firearms and Link’s arsenal of weapons. Eight characters are playable from the beginning of the game and the remaining four characters can then be unlocked by completing different tasks within the game.

Super Smash Bros. is quick and easy to learn. Unlike other fighting games you don’t have to learn long complex button sequences. Single player mode is fun, but the real enjoyment in with you friends in multiplayer mode.

The only thing I have against Super Smash Bros. is my memories.
Back in the day, when Super Smash Bros. was the ‘in’ game, I was the only one of my friends who didn’t have a copy. While my friends were playing and getting good. Only chance I got was when they wanted to play and I got my ass kicked every time. It was nice to finally get to play against the computer on my terms and was able to enjoy playing Super Smash Bros.

Check out my Twitch channel for Schedual of upcomming streams.