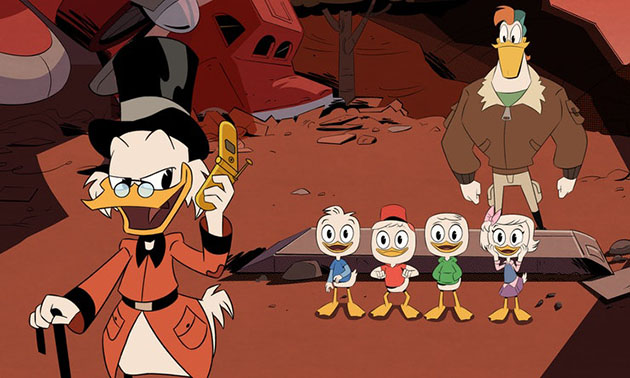 This article was original posted on Geek World Order and is being reposted here becuase its the best review I have seen so far.

Solving mysteries and rewriting history is what’s on tap for DuckTales, the newest series to debut on Disney XD. The highly anticipated series debuted with a 24 hour showing of the one hour premier. Did the new DuckTales live up to expectations? Absolutely.

The episode had a lot of great things going on: great animation, a compelling story, and unique characters that all contributed something to the overall intrigue.

The episode sets things up as Donald Duck is getting ready for a job interview. Due to shenanigans from his nephews, he is left without a babysitter and is left with leaving them with Scrooge McDuck. The tension between the two is quickly seen. Something in their past estranged their relationship, which will be explored later on in the series. There are some hints dropped near the end of the episode, but that’s another blog for another time.

The three nephews are introduced and we begin to see their personalities. The once indistinguishable beyond what color they were wearing triplets now have individual personalities that set them apart. Huey is adventurous but by the book. He is prepared and cautious. Dewey is the attention seeking middle child that yearns for adventure and to be noticed and is wreckless in doing so. Louie is the lazy one that desires treasure but is okay with getting it in the easiest way possible. They all have a good starting base to help their characters grow.

The breakout star of the series may be Webby. She is portrayed as exceptionally knowledgeable and skilled in adventure tactics. That is tempered by an awkwardness in that she is very overprotected and has had little contact with other kids her own age.

The series is as funny as it is fun. There are a lot of references and easter eggs in the episode that are fun to find. There is a lot of backstory worked into the series and a lot of speculation can be had with it (once again, another blog for a later date.)

The series is of course headlined by Scrooge McDuck voiced expertly by David Tennant. Scrooge is a bitter old duck that is slowly brought back to his senses and adventurous ways by his great nephews. They give a new found desire for exploration and we have the basis for the new DuckTales. Really cementing the character is the choice to use Scrooge’s oldest rival, Flintheart Glomgold as the villain of the episode. The second richest duck in the world is insanely jealous of McDuck’s fortune and will go to any length to acquire treasure, including using people then casting them aside the second they aren’t needed. Scrooge is as hungry for money and treasure but insists on making his money square and honest.

DuckTales brings in everything that made the original series a hit. It also provides new twists and dynamics to keep it fresh and entertaining. There is a lot of room for character development and a lot of questions that need to be answered. As far as reboots go, DuckTales nails it and is on track to be one of the best nostalgic reboots of all time.

The regular half hour series debuts in September and I highly recommend watching it as it comes out.