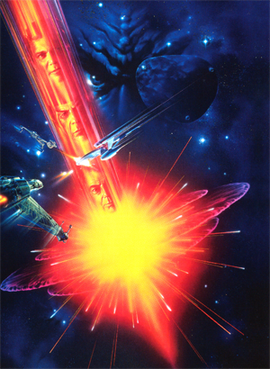 As a Klingon moon, Praxis, explodes without warning, the starship USS Excelsior is struck by the shock wave and its crew discovers that much of the moon has been obliterated. The loss of their key energy production facility and the destruction of the Klingon homeworld’s ozone layer throws the Klingon Empire into turmoil. No longer able to maintain a hostile footing, the Klingons sue for peace with their longstanding enemy, the United Federation of Planets. Starfleet sends the USS Enterprise-A to meet with the Klingon Chancellor, Gorkon, and escort him to negotiations on Earth. Enterprise‍’​s captain, James T. Kirk,, opposes the negotiations and resents his assignment.

After a rendezvous between Enterprise and Gorkon’s battlecruiser they continue towards Earth, with the crews sharing a tense meal aboard Enterprise. Later that night, Enterprise appears to fire on the Klingon ship with a pair of photon torpedoes, disabling the artificial gravity aboard the Klingon vessel. During the confusion, two figures wearing Starfleet suits and gravity boots beam aboard the Klingon ship and grievously wound Gorkon before beaming away. Kirk surrenders to avoid a fight, and beams aboard the Klingon ship with Doctor Leonard McCoy to attempt to save Gorkon’s life. The chancellor dies, and Gorkon’s chief of staff, General Chang, puts Kirk and McCoy on trial for his assassination. The pair are found guilty and sentenced to life imprisonment on the frozen asteroid Rura Penthe. Gorkon’s daughter, Azetbur, becomes the new chancellor, and continues diplomatic negotiations; for reasons of security, the conference is relocated and the new location is kept secret. While several senior Starfleet officers want to rescue Kirk and McCoy, the Federation president refuses to risk full-scale war. Azetbur likewise refuses to invade Federation space, stating that only Kirk and McCoy will pay for her father’s death.

Kirk and McCoy arrive at the Rura Penthe mines and are befriended by a shapeshifter named Martia, who offers them an escape route; in reality, it is a ruse to make their arranged deaths appear accidental. Once her betrayal is revealed, Martia transforms into Kirk’s double and fights him, but she is killed by the prison guards to silence any witnesses. Just before the prison warden reveals who set them up, Kirk and McCoy are beamed aboard Enterprise by Captain Spock, who had assumed command and undertaken an investigation in Kirk’s absence. Determining that Enterprise did not fire the torpedoes but that the assassins are still aboard, the crew begins looking for them. The two assassins are found dead, but Kirk and Spock trick their accomplice into believing they are still alive. When the culprit arrives in Sickbay to finish off the assassins, Kirk and Spock discover that the killer is Spock’s protégé, Valeris. To discover the identity of the conspirators, Spock initiates a forced mind-meld, and learns that a group of Federation, Klingon, and Romulan officers plotted to sabotage the peace talks, fearing the changes their success might bring (the titular “undiscovered country”), and Chang is one of the conspirators. The torpedoes that struck Gorkon’s cruiser came from a prototype Bird of Prey that can fire while cloaked.

The crew contacts Sulu, who informs them the conference is being held at Camp Khitomer. Both ships head for the talks at maximum warp. As Enterprise nears the planet, Chang’s cloaked Bird of Prey moves to intercept. With Enterprise unable to track his ship’s position, Chang inflicts severe damage on Enterprise and then Excelsior. At the suggestion of Uhura, the Enterprise’s communication officer, Spock and McCoy modify a photon torpedo to home in on the exhaust emissions of Chang’s vessel. The torpedo impact reveals Chang’s location, and Enterprise and Excelsior destroy the Bird of Prey with a volley of torpedoes. Crew from both ships beam to the conference and halt an attempt on the Federation president’s life. Kirk pleads for those present to continue the peace process. Having saved the peace talks, Enterprise is ordered back to Earth, but the crew decide to take their time on the return voyage. As Enterprise cruises towards a nearby star, Kirk proclaims that though this mission is the final cruise of Enterprise under his command, others will continue their voyages.

Jedite83’s Review
Many years ago, when I originally watched Star Trek VI: The Undiscovered Country, I hated the movie. I though the ploy was stupid. It took a number times watching the movie over the years to start to truly appreciate the movie and it’s plot.
When compared to the earlier Star Trek movies the special effects continue to incrementally improve with the technology available to the film makers. One special effect worth mentioning is the destruction of the Klingon moon Praxis. The energy ring it emitted has become a coming effect in sci-fi and the effect carries the name of the Klingon Moon – the Praxis Effect. I always et a chuckle when I see the effect used in the re imaged version of Star ways which use the effect during the Death Stars destruction.
The story of Star Trek VI: The Undiscovered Country was difficult for me to understand when I was far younger, but over the years I have grown to not only enjoy it, but to appreciate it’s subltys.
It’s become one of my favorate Star Trek movies and it worth the 2 hours to watch.

Check out my Twitch channel for schedual of upcomming streams.