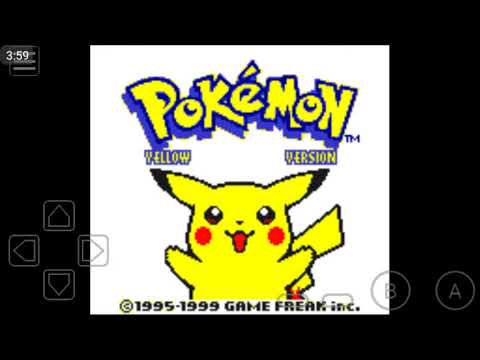 Pokemon Yellow: Special Pikichu Edition was my favorite game as a teen, having talked my mom into picking my copy up launch day while I was in school; and one that I regularly come back to, even as an adult.
Pokemon Yellow was released in North America in October, 1999 as the 3rd game in the first generation of games, following Pokemon Red and Blue. While similar to the earlier games, there were a handful of changes to bring the games story more inline with that of the anime, along with fixing some bugs that were in the earlier games.

In Pokemon Yellow: Special Pikichu Edition you take on the roll of a new Pokemon trainer. The opening tutorial explains the world is filled with creatures called Pokemon. Some humans study Pokemon, others keep Pokémon as pets, while others use them in battles in order to obtain honor, power, or money. After entering your name and your rivals name, you find yourself in your bedroom. You soon meat the town’s resident Pokemon expert, Prof. Oak, who gives you your first Pokemon, a Pikachu that refuses to stay in it’s Pokeball. from here you set out to train your Pokemon, collecting others as you battle other trainers and Gym Leaders (harder, more experienced trainers who act as mini bosses throughout the game) to collect badges so you can take on the Pokemon League, the greatest, and most powerful Pokemon Trainers in the world.

The graphics in Pokemon Yellow are not as polished as later games in the series, but continue to hold up quite well almost 20 years later.

Like all main series Pokemon Games, the music in Pokemon Yellow is good, but can get repetitive and many hours of listening to it non stop.