This is a repost from The Dragon’s Tower. 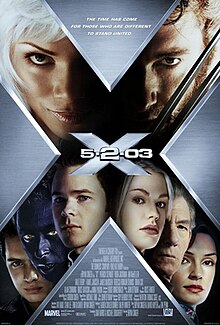 The second of Bryan Singer’s X-Men trilogy depicting Marvel’s X-Men superheroes released in 2003 by Fox studios. The other two movies in the trilogy are X-Men (2000) and X3: The Last Stand (2006). Following the popularity of the X-Men trilogy, Fox released a trilogy of Prequels consisting of X-Men: First Class (2011), X-Men: Days of Future Past (2014), and X-Men: Apocalypse (2016) and two Wolverine movies, X-Men Origins: Wolverine (2009) and The Wolverine (2013). A third, and rumored to be final, Wolverine movie comes out this year called Logan (March 3, 2017). The 2016 Deadpool movie starring Ryan Reynolds is also considered a part of Fox’s X-Men film series.

Nightcrawler (teleportation) attacks the White House in an attempt to assassinate the President. Xavier and Cyclops head to visit Magneto in prison to see if he knows who was behind the attack. Jean and Storm are sent to fetch Nightcrawler, leaving Wolverine in charge of the students of Xavier’s School for Gifted Youngsters. Using the failed attack on the President as leverage, Colonel William Stryker gets the President to agree to an attack on Xavier’s School saying it had ties with the mutants responcible for the attack. He sends Lady Deathstrike to capture Xavier and Cyclops and attacks the school himself.

Wolverine, with the help of Rogue, Iceman, and Pyro, is able to repel the attack long enough for the children to escape. Wolverine and Co. head to Boston to visit Bobby’s parents. Wolverine manages to contact Storm and Jean, with Nightcrawler in custody, who are able to swing by and save the day when Bobby’s family freaks out and calls the police. The newly freed Magneto, thanks to a clever prison break by Mystique, prevents the fleeing jet from crashing and the Brotherhood and the X-Men join forces to save Xavier and the captured mutant children. They end up saving the world and discovering some of Wolverine’s forgotten past.

We see the death of one of our heroes and a teaser to the rise of another.

There were a lot of good fight scenes and some funny one-liners, but the acting really stole the show. It was far better than the first X-Men movie from 2000. I enjoyed the Dark Phoenix teaser, even though I hated the outcome in X-Men: The Last Stand. I am not sure I like how much of a focus there is on Wolverine. It feels more like a Wolverine movie where some of the other X-Men show up every now and then. I would have liked to see more of the other characters we get glimpses of, such as Colossus. Another example is Jubilee. This is the second movie we see her in, but not much is mentioned of her at all. Mind you, this is me nitpicking, because it was pretty amazing.