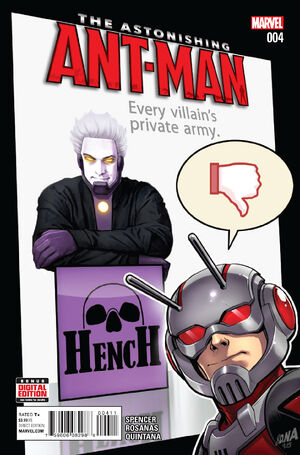 To Catch You Up

The Power Broker made an app, Hench, where villains can hire other villains to defeat those pesky superheroes. Unfortunately for him, Ant-Man’s employees did some freelance work and hacked into the app and helped create a competing app, Lackey. Meanwhile, Ant-Man gets a visit from an old… friend… Beetle.

In order to connect with his daughter, Ant-Man got tickets for a charity basketball game and secretly gave them to his daughter. At the game, thanks to the new Lackey app, a new villain with the power to control people with his voice, The Voice, takes over the PA system and makes everyone attack each other.

Ant-Man, his daughter Cassie, Darla, and basketball player Jalen Diggs (who was wearing earplugs) are unaffected and are able to get the crowd under control. After the battle, Cassie discovered her dad was the one who gave her the tickets and is furious. She declares she wants nothing to do with him and leaves.

Meanwhile, Giant-Man is battling his own bad-guy, Unicorn, when he gets caught in the suspension cables of the Golden Gate Bridge. TO BE CONTINUED…

I like the forbidden tryst with Beetle. It humanizes Ant-Man. He has needs like any other man and makes bad choices. I feel bad for him regarding his daughter. He is only trying to keep her safe, but still be part of her life and she just thinks it is stalking. So sad. Still no word on why every comic opens with him in prison. Oh well. Until next time!