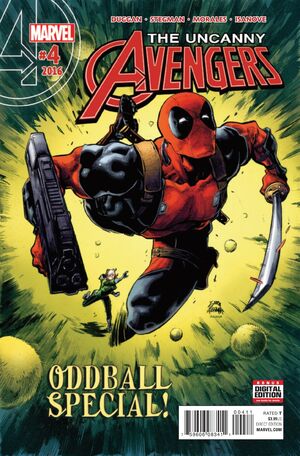 “To encourage peace after the war between the Avengers and the X-Men, the original Captain America, Steve Rogers, brought together members of both teams to form the Avengers Unity Squad. Now, to promote cooperation in the face of rising tensions, the Unity Squad has expanded to include a new faction: Inhumans.

“The Unity Squad is pulling out all the stops to prevent the nightmare future that Cable returned from: a future where the Shredded Man — an Inhuman who covered Boston in plant creatures — created a deadly pathogen that wiped out everyone on Earth except for a few Inhumans, but there’s one problem they didn’t foresee: The Shredded Man is Synapse’s Grandfather.” — The Uncanny Avengers 004 (Jan. 2016)

Eight Months Ago. The Terrigen Mist covered Synape’s Grandfather’s house and Synapse, her Grandfather and her brother emerged as Inhumans.

Boston. Now. Synapse, in tears, begs her Grandfather, the Shredded Man, to stop what he is doing. He refuses, shouting, “No one can stop me!” Synapse begs to differ and charges to attack.

Elsewhere. Cable, Rogue, and Deadpool are in the thick of it, surrounded by plant creatures. Deadpool, running out of ammo, asked Quicksilver to stop by his armory and pick up more. Quicksilver brought back a bunch of guns, ammo, and a guy from the gun show. Together, they opened fire on the hoards of monsters.

M.I.T. The Human Torch enlisted the help of the smartest people in the USA at M.I.T. to develop an anti-toxin to the Shredded Man’s plague. They think they have found the anti-toxin and test it on the Human Torch. After he gives himself the shot, he gives the serum to Quicksilver to give to every person on the planet who is infected. Knowing full well Quicksilver will never stop until the very last person on the planet has been inoculated.

Meanwhile, Cable gets a psychic flash and sees Synapse kill her Grandfather. Somehow, she will blow all their hard work. Cable runs to stop her. He succeeds and begins to talk to the Shredded Man. He knows the Shredded Man will happily die for his cause, but will he let his own granddaughter die? Cable shoots Synapse to find out. As Shredded Man watches his beloved granddaughter become infected with his plague, he can’t bear to see her die ashamed of him, so he undoes his plague and destroys his plant creatures.

As his body dissolves, Shredded Man vows to come back and show no mercy. Not even to his granddaughter. The others join them and before they are in ear shot, Synapse begs Cable not to tell the rest about her relationship to the Shredded Man. He agrees to give her time to tell them himself. They all shuffle home and Steve Rogers offers Cable a spot on the Unity Squad, luring him with the promise of going after Red Skull and Professor Xavier’s brain. Cable stays.

Meanwhile, somewhere in space a man in a suit of armor (no, not HIM) saves a space station from giant space aliens. When they open the doors to thank him, he introduces himself as Hank Pym wearing his friend Ultron. TO BE CONTINUED…

Say WHAT?! Hank Pym is wearing Ultron as a suit? I’m not so sure about this. However, I am happy about the teaser cover at the back of this issue. It shows Rogue being held by Gambit!!! One of my favorite X-Men! Cable, Deadpool, AND Gambit!! Yay! The next issue is going to be awesome. Until next time!