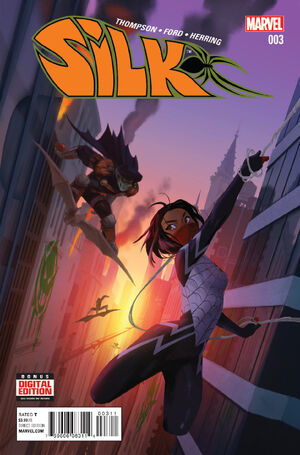 “When attending a scientific demonstration, Cindy Moon was bitten by a radioactive spider. As a result, she developed adhesive fingertips and toes, the proportional strength of a spider, superhuman speed and agility, and a special organic webbing that’s woven directly out of her fingertips. After being locked away in a bunker for ten years, Cindy was set free and became the crime-fighting super hero Silk.

“For months, Cindy Moon has been working undercover as a criminal in Black Cat’s gang while continuing the search for her family. So far, she has only been able to find her brother Albert, who was recently arrested under a false name and linked to the dangerous gang the Goblin Nation, putting the group squarly in Silk’s sights.” – Silk 003 (Jan. 2016)

With the help of her… friend, Peter Parker, Cindy was able to stage a fight between Spider-Man and Silk to solidify her “bad-guy” undercover personae. Peter didn’t like the idea, but eventually agreed. Even her brother thinks what she is doing is dangerous (it is) and urges her to be safe.

While juggling her search for her parents, caring for her brother, being a criminal, being a super-hero, and visiting her shrink to work out her issues from being locked in a bunker for ten years Cindy also has to juggle her personal life and her work. Her shrink asks her why she is angry and Silk can’t answer. Which makes her angry, so she manages her anger by taking it out on the Goblin Nation.

Silk reports back to Black Cat about the underground city she found and Black Cat orders her to take Shrike and gather intel on the underground Goblin Nation city. Shrike doesn’t trust Silk nor does he believe the city actually exists… until he sees it and sees the Goblin teens practicing. Silk’s spider senses go off and she warns Shrike it could mean danger is coming. He agrees with her and pushes her off the wall and into the center of the practice arena. Now outnumbered by heavily armed Goblin teens, Silk takes a fighting stance and prepares for battle. TO BE CONTINUED…

I like Silk. She is very relateable having to juggle life and work and being a super hero. As a mom, business woman, author, and designer I juggle a few hats myself. I also like how witty she is, always ready to toss out a witty barb or something geeky and funny in the middle of battle. It reminds me of Spider-Man and Deadpool. I am enjoying the storyline for Silk as well. I can’t wait to see what the writers will throw at her next. Until next time!