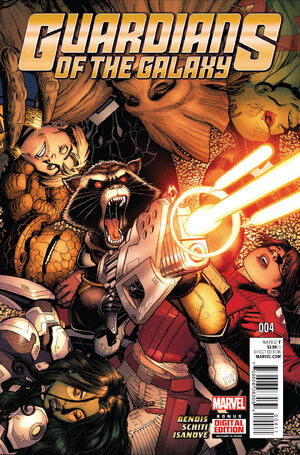 “The entire galaxy is a mess. Warring empires and cosmic terrorists plague every corner. Someone has to rise above it all and fight for those who have no one to fight for them. A group of misfits — Drax the Destroyer, Gamora, Rocket Raccoon, Groot and Flash Thompson, a.k.a. Venom — joined together under the leadership of Peter Quill, Star-Lord. With new members Kitty Pryde and Ben Grimm, a.k.a. The Thing, they serve a higher cause as the Guardians of the Galaxy.

“Hala, the last surviving Kree Accuser, holds the Guardians responcible for the destruction of her homeworld. She’s pledged to punish them by razing both of Peter Quill’s homeworlds: Spartax and Earth. On Spartax, the Guardians were helpless to stop Hala as she rampaged through the capital and stranded Peter in orbit. When they tried to escape and rescue him, Hala gave chase. Gamora threw herself at their pursuer, and now lies beaten on the surface of Spartax.” – Guardians of the Galaxy 004 (Jan. 2016)

Peter Quill is on Rocket Raccoon’s ship, flying away from Spartax. Drax is the first to demand they return for Gamora who was left to die on Spartax. While the Guardians argue over going back to get her Gamora is getting severely beaten up by Hala. On the ship Peter reveals Hala is going to target Earth as well. Hala believes the Guardians are responcible for blowing up her planet. It was really J’Son of Spartax who blew up the Kree homeworld. The Guardians were unable to stop him. After Peter’s revelation they decide to turn around and go back for Gamora and to stop Hala.

The Guardians make it back to Spartax and try to explain to Hala it wasn’t Peter or the Guardians of the Galaxy that destroyed her homeworld. She now blames J’Son, but wants to get back at him by killing his son. Her plans remain unchanged. Kitty Pryde comes up from the ground and pulls her into the earth, trapping her to that spot. Drax wails on her until she is good and bloodied. Then The Thing drops from the sky like a bomb and crushes her.

Once Hala is unconscious they check on the fallen Gamora. Drax immediately picks her up and refuses to put her down. Just as they decide what to do with Hala they get a visitor. Yotat the Destroyer of Destroyers shows up and starts blasting everyone. TO BE CONTINUED…

OMG Is Drax in love with Gamora?! Did I miss something?! The girl in me is excited at the prospect of Drax and Gamora getting together. It seems fitting. If they aren’t, it was still very sweet how he thought of her first. I wonder what the Brood Queen promised Yotat? I bet she turns on the rest of the Galactic Council, which right now consists of her and Annihilus. I am a little dissapointed in the cover for this comic. It doesn’t relate to what happened at all. It shows the bodies of the fallen Gaurdians surrounding Rocket and Rocket up and blasting away. That never happened in this issue. I could also be nitpicking. Until next time!