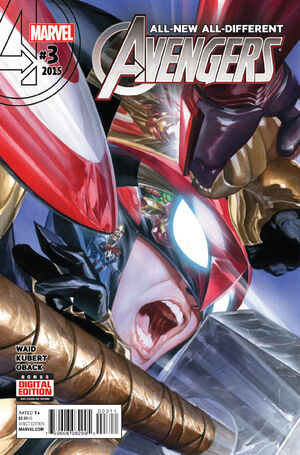 “And there came a day, a day unlike any other, when Earth’s mightiest heroes found themselves united against a common threat. On that day, the Avengers were born — to fight the foes no single super hero could withstand!

“But that day was… a while ago.

“There are plenty of hero teams active in the world, but none currently hold the legendary mantle of the Avengers. Not yet, anyway…

“Warbringer is on the warpath, trying to assemble pieces of an ancient artifact that could wreck untold havoc on the world. A slapdash team consisting of Captain America, Iron Man, The Vision, Spider-Man, Nova, Ms. Marvel and Thor followed him to a train tunnel and tried to stop him from getting the second piece, but Mr. Gryphon, the mysterious buyer of Avengers Tower, flooded the tunnel with them inside. Warbringer escaped, and now he only needs one more piece to complete his sinister scheme…” – All-New, All-Different Avengers 003 (Jan. 2016)

After the tunnel flooded, Iron Man, Thor, and The Vision saved Spider-Man, Nova, and Ms. Marvel from being crushed in the current and Thor gave them CPR. (Captain America did not need saving.) Sam is too afraid to tell the team Warbringer is ready to destroy Earth because of him. Iron Man and the other big league players opt to leave Nova, Ms. Marvel, and Spider-Man behind, claiming they are just kids, but Spider-Man convinces them to let the “kids” come along.

Hart Island, Long Island Sound. Lord Gryphon and Warbringer are in a graveyard digging up the third piece of the artifact. Lord Gryphon intends to open a portal to the Chitauri homeworld, so an army of Chitauri Invaders can glide through and destroy the Earth. The portal begins to open and Warbringer is shown an image of his homeworld he does not recognize. Before he can get some answers our heroes show up and Thor lays down some lighting. Warbringer is knocked out and our heroes get a hold of the artifact pieces. They stop the portal from opening until they notice Warbringer was faking it and Iron Man realized the only way to save them all was to open the portal and send Warbringer through.

In order for them to be successful, meaning get Warbringer through the portal before his buddies can come through, they have to time it to the microsecond. Spider-Man is handed the artifacts and is told to put them together using his proportional speed of a spider, then destroy them with-in a split-instant. Sounded easy enough… until Lord Gryphon used his magic to make the bodies rise from their graves and attack our heroes on the ground (Ms. Marvel, Spider-Man, and Captain America).

The team congratulate themselves until Thor ruins the fun and mentions Warbringer was talking as if he had a vendetta and even mentioned Nova by name. The Vision covered for Nova and everyone believed him. They are happy again as Iron Man invites them all to be Avengers.

Meanwhile, on the Chitauri homeworld, Warbringer is noticing a few changes with his home. The fact that it is the wrong time. He was blasted far into the future and was instantly killed by the first Chitauri he encountered.

Epilogue: Nova rushes towards The Vision to thank him for not telling the Avengers that Warbringer was there because of him. The Vision says it is no problem and can remain their little secret… so long as Nova remembers he is now in The Vision’s debt. TO BE CONTINUED…

I am not sure I am happy with The Vision blackmailing Nova. Even without emotions, he should still know what is right and what is wrong. Also, I suspect Lord Gryphon is Loki in disguise. We shall see if I am wrong in the next few issues. Until next time!