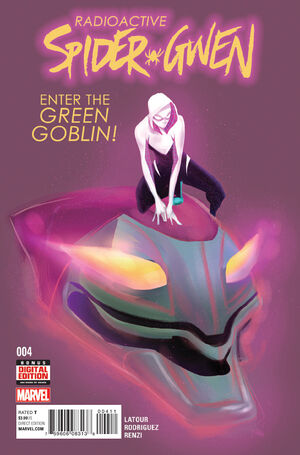 “As a teenager, Gwen Stacy was bitten by a mutated spider. The bite transformed her, granting her amazing powers: a precognitive awareness of danger, adhesive fingertips and toes, and the proportional speed and strength of a spider. To the residents of New York, she is the dangerous vigilante called Spider-Woman, but you know her as Spider-Gwen.

“After Spider-Gwen was accused of killing Peter Parker, a man-hunt (or woman-hunt) for Spider-Gwen began headed by George Stacy. After being unable to catch her, Stacy was removed from the case and Frank Castle was assigned. The hunt still continues, but George (now knowing Spider-Woman is his own daughter) believes Spider-Woman was not responsible for killing Peter Parker. He said as much to Ben Parker.

“Harry Osborne, fresh from the Army and S.H.I.E.L.D., he has come to get revenge on Spider-Woman for the death of Peter.”

Harry Osborne drank some of Peter’s Lizard solution and gained extra strength. He beat Gwen unconscious and unmasked her. He was devastated when he saw Spider-Woman was Gwen. TO BE CONTINUED…

This storyline is getting good! Harry as the Green Goblin, trained by the US Military and S.H.I.E.L.D., just beat up the girl he loved who he believes is responsible for killing his best friend Peter. Oh, this is going down epic style! How will Harry react now? Will he continue his quest to obliterate Spider-Woman now that he knows it is Gwen?? So good! Until next time!