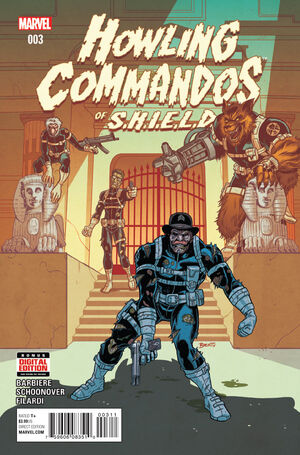 “From the desk of Dum Dum Dugan…

“I’ve set up shop at S.T.A.K.E. –that’s S.H.I.E.L.D.’s special division for Supernatural Threat Analysis for Known Extranormalities– and have been put in charge of a rag-tag group of monsters who I’m calling the Howling Commandos. I’m gonna help ’em earn that name, one mission at a time.

“We tend to investigate the weirder side of S.H.I.E.L.D.’s case files, and our most recent mission was no exception. While searching for a missing subway car, we found a girl with the ability to summon spirits that resemble ancient Egyptian monsters… she isn’t able to control ’em, so we had to bring her back to base for evaluation. Now we’ve gotten word of a supernatural attack on an Egyptian museum, and I’m startin’ to feel this might all be connected…” – Howling Commandos of S.H.I.E.L.D. 003 (Dec. 2015)

At the museum of Egyptian Culture in San Francisco Lord Sphynx and his apprentice are stealing magical artifacts. Before leaving the Apprentice puts a spell on the museum to contain what is within. The Apprentice is Nadeen’s twin brother Navid and is controlling Nadeen remotely, making her use her powers to destroy S.T.A.K.E. headquarters. Once everyone gets her under control she reveals the Howling Commandos are walking into a trap. Dugan, Sitwell, the Monkey, and Warwolf enter the museum already in chaos and attack the soldiers The Sphynx left inside. The soldiers were drones and rigged to explode… and it did. TO BE CONTINUED…

I like Nadeen. I like seeing a hero from the very beginning. I hope she joins the Howling Commandos permanently. Also, seeing Warwolf as Werewolf by Night was cool. He was viscous and awesome. I want to see what will happen next with Navid and Nadeen and the Sphynx. Until next time!