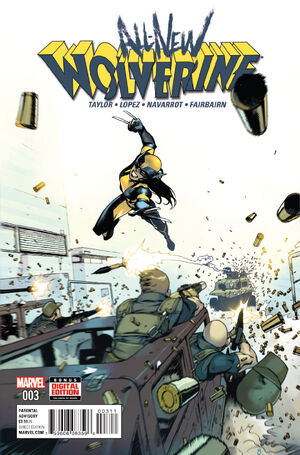 “X-23, Laura Kinney, was created to be a weapon, but she escaped that life with the help of the man she was cloned from, the man who became her mentor: The Wolverine. Tragically, the original Wolverine has fallen. Laura will live as his legacy and fight for her better future. She is the All-New Wolverine.

“Wolverine stopped an assassin who turned out to be her clone. Alchemax Genetics tasked Laura with hunting down three other clones, claiming that these “sisters” blew up the laboratory where they were created. After meeting the sisters-called Gabby, Zelda, and Bellona- Laura has begun to question whether there’s more to the story then the one Alchemax is telling.

“But before she could get answers, Alchemax security attacked. Wolverine and the sisters won the skirmish -that is, until they were all shot by the mercenary known as Taskmaster.” – All-New Wolverine 003 (Dec. 2015)

Wolverine disabled Taskmaster and no sooner had his head hit the ground, the sisters stood up. They had been wearing body armor. The sisters and Wolverine escaped the sewers in an armored car. They were pursued by Captain Mooney and Alchemax Genetics goons, but Wolverine attacked them while the Sisters escaped. She was able to track them down and discovered they did not blow up the lab. Alchemax lied to her. Alchemax is also watching all of Wolverine’s friends, so she can’t go to any of her usual friends to help. Instead she heads to Doctor Strange. TO BE CONTINUED…

Yay! Doctor Strange cameo! The storyline is going slowly, but it is intriguing. I was still a little hesitant about a female Wolverine who hates to kill people, but it is growing on me. She is more dynamic than the first comics suggested. I can’t wait to see how they develop her further. Until next time!