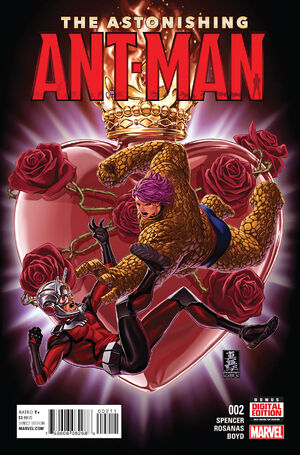 “Usually, Scott Land is Ant-Man, the size-changing, ant-communicating super hero and owner-operator of Ant-Man Security Solutions (currently looking for clients — Do you know anyone, or…?).

Meanwhile, the Hench App is setting the tech sector on fire, putting freelance super villains at the fingertips of anyone with a smartphone. It was actually beta tested on Scott! (Four-and-a-half stars, Whirlwind!)

So, Scott is in prison, and they never say what for. We see Grizz and Smith at Crossfire’s place for a job interview. Grizz has issue with betraying Ant-Man, but Smith sees it as helping him maintain his “Bond Villain” lifestyle. Cross and Son want Smith to hack into somewhere and steal all the information. My guess is they are hacking into the Hench App. Cross and Son pay them with a briefcase full of money (and they got to keep the briefcase!).

Scott is headed for a job interview of his own for a new potential client for Ant-Man Security Solutions. He sees a Magician auditioning for the opening act of some undisclosed musician and he clearly does NOT make the cut and is NOT happy about it. The Publicist for the star makes him sign a Non-Disclosure Agreement and then tells him the star is none other than Darla Deering, his ex-girlfriend that he failed to dump… he just left her when his daughter came back to him and said nothing.

Darla was clearly upset with him and as they argued The Magician showed up and attacked. Scott was able to distract him while Darla punched him out. (Thing Rings for the win! Am I right?) Darla and Scott talk on the roof and they hash everything out. Unfortunately, it turns out she was recording all of this for her reality show and had hired The Magician via the Hench App. While Scott is sitting there talking about how he could use someone he can trust who is reliable and upstanding, Captain America (A.K.A. Sam Wilson) shows up and says he has a job for him. TO BE CONTINUED…

So, out of all the new comics I have been reading, Ant-Man seems to do a WAY better job at introducing characters than any of the others. When they bring in someone Scott has a history with they actually take the time to explain some of the history. Brief, but they get all the highlights in there. Way to go Ant-Man writers! I still have no idea how he ended up in prison, but hopefully the next issue will tell. Until next time!