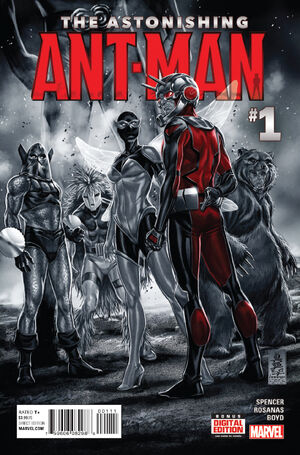 Meet Scott Lang. “A Miami-area small business owner with a teenage daughter and an ex-wife. Oh, and he is Ant-Man.” – The Astonishing Ant-Man 001 (Oct. 2015)

Scott Lang is the owner of Ant-Man Security Solutions. Meet his employees; a man in a bear suit (Griz) and Machinesmith (the cyber-security expert). His benefactor is Ms. Morgenstern, the former Miss Patriot, who runs a retirement home for former super heroes. She set up a meeting with the Miami Cultural Affairs Department to help him get more clients… and pay her back the loan she gave him to get him started. He sneaks away on a regular basis to be apart of his daughter’s life, but she has no idea he is even there and resents him for leaving her.

Meanwhile at Cross Technological Enterprises, Mr. Cross gets a visit from his son who has a business venture he wants his “Pym Particle” ridden father to listen to. A nameless “man” stands before them with the Hench App. An app for killing your favorite super heroes for a price. A very high price. The app matches your hated hero with a villain that can kill them once and for all. He demonstrates by sending Whirlwind after Ant-Man, currently at his meeting with the Miami Cultural Affairs Department and his ex-wife’s new husband who hates him.

The “Man” asks for 1.2 Billion from Cross to have Whirlwind kill Ant-Man right then and there. Cross refuses to pay and Whirlwind lets Ant-Man go. Scott ends up back in jail, but not before getting a survey from Hench regarding his Super Villain Encounter. TO BE CONTINUED…

HAHAHAHA!!!!! I love the Hench App. It even gives the hero a survey to fill out. Oh that is funny! I have no idea why Scott ended up in jail again. I guess we will find out in the next issue. That was way better than the old Ant-Man comics. It was much funnier at least. More on the way in a few days. Until next time!