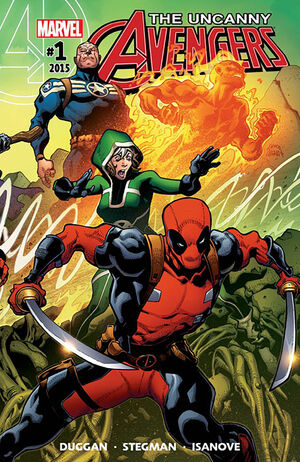 The Terrigen Mist is sweeping over the Earth, turning new people into Inhumans. Including one fellow who was dying of Cancer, but now is an Inhuman who is in-tuned with the dying Earth and plans on avenging it. I have a feeling we will see him again. “After the war between the Avengers and the X-Men, the original Captain America, Steve Rogers, brought together members of both teams to form the Avengers Unity Squad. The Team was designed to show the world that mutants and humans could work together. (It didn’t always work the way ot was suppose to.) Now, to promote cooperation in the face of rising tensions, the Unity Squad has expanded to include a new faction…” – The Uncanny Avengers 001 (Oct. 2015)

The Uncanny Avengers consist of Rogue, Synapse, Spider-Man, Deadpool, the Human Torch, Captain America (Steve Rogers), Doctor Voodoo, and Quicksilver. The comic opens with the team, minus Quicksilver, fighting a Super-Adaptoid robot that absorbs powers once it touches Super-Heroes, be they X-Men or Inhuman or other. The robot is finally downed by Deadpool when he touches it with his Cancer. The robot succumbs to the aggressive Cancer and dies. Brutal.

Spider-Man, aka Peter Parker, is not happy Deadpool, who he feels is reckless, is on the team and quits. After a dreadful press conference, Rogue threatens to leave as well. We also discover the Terrigen Mist is poisoning the mutants it encounters, forcing them to take Anti-Terrigen Solutions or die. Captain America has to defend Deadpool to Rogue and says he trusts him. Not only that, but Deadpool is funding the Unity Squad with the sales of his Deadpool branded Merchandise.

Meanwhile, Quicksilver, having learned Magneto is not his father, is dating as many girls as he can, including Synapse, aka Emily. Emily collapses during their date and Quicksilver begins to run her to a hospital, but she insists on going to Boston.

Boston is covered with vines growing bulbous sacs that pop out monsters. They start as pretty flowers, grow sacs, then out comes the monsters to kill them all. And the ones terrorizing Boston and giving the team a run for their money are just babies. The Boston PD run into the cause of the new growth… a new villan on the scene, The Shredded Man. He wants to destroy humanity so the Earth can live. TO BE CONTINUED…

For an introduction to the new team, it wasn’t half bad. I love the addition of Deadpool. I am a huge fan, so of course, right? The creepy new villain would be creepier if he did not look like a bunch of mangled penises. Hence the name Shredded? Of course he is the old Cancer guy from the beginning that was touched by the Terrigen Mist. Peter Parker wussing out in the beginning was sort of lame. Deadpool and him have worked together before. He should already know how Deadpool is and deal with it. I like Captain America’s reply to Spidey quitting. “Ok. See ya.” Wow. I wonder what Deadpool did to earn Captain America’s trust that he would let one of his fellow Avengers just walk? Curious. Until next time!