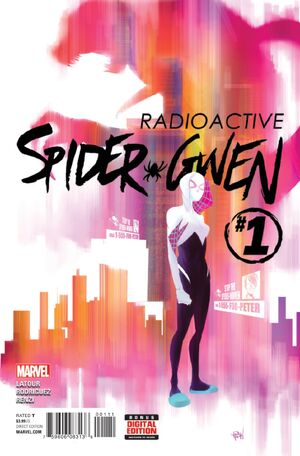 Welcome to the new Radioactive Spider-Gwen! This comic takes place after Secret Wars ended and the Multiverse was restored. Gwen Stacy is back on the newly restored Earth-65. A new Lizard has shown up and Gwen has to find the source. As Gwen hurries her way to work, that she is already late for, she calls her dad to let him know she is on her way to work and not playing the Super Hero and saving everyone along the way. Captain Stacy has been relieved of command of the task force meant to hunt down Spider-Woman and is trying to convince his higher-ups to stop the hunt. He is trying to convince them she is one of the good super heroes.

Meanwhile, Gwen is finding a lead to whoever, or whatever, robbed her boss’ corn-dog establishment and hunted down the Bodega Bandit, a petty burglar who was ribbing the joint when a giant Lizard attacked. The only man responsible for creating the Lizard that was Peter Parker was Dr. Curt Connors of Midtown High. Whose location and contact information has been hidden by someone.

Spider-Gwen heads to the sewers to track down the Lizard. She finds him and is about to capture him when she is ambushed by lizard-men and Captain America (who is female in this universe) on behalf of S.H.I.E.L.D. TO BE CONTINUED…

Yay for bringing back Spider-Gwen and pretty much picking up where we left off, but there were so many questions left unanswered as well. In A-Force #005 we see Spider-Gwen rescuing Mary Jane and they acted as if they were dating. Is Gwen a lesbian and in love with Mary Jane? When will we see Frank Castle again, he took over Captain Stacy’s job as task force commander to take down Spider-Gwen. In the last Spider-Gwen, Frank had an encounter and discovered who Spider-Woman really was. Will that carry over to this volume? So many questions! Until next time!