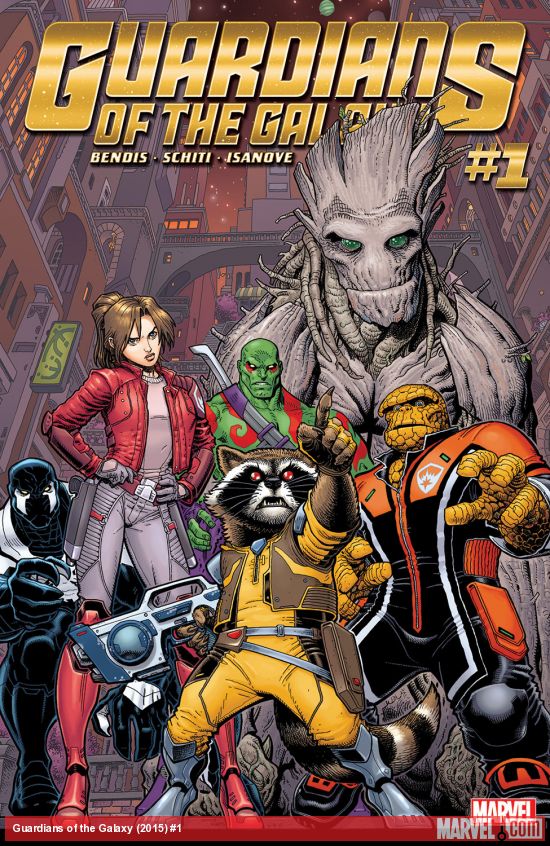 “The entire galaxy is a mess. Warring empires and cosmic terrorists plague every corner. Someone has to rise above it all and fight for those who have no one to fight for them. Against their natures, a group of misanthropes and misfits came together to serve a higher cause. Drax the Destroyer, Gamora, the most dangerous woman in the universe, Rocket Raccoon, Groot, and Flash Thompson, aka Venom all joined together under the leadership of Peter Quill, Star-Lord to be the saviors of the spaceways, the conservators of the cosmos, the…

Guardians of the Galaxy!

The comic opens with Annihilus the Annihulator, Ruler of the Negative Zone calling a secret meeting between the Kings and Queens of the Galaxy… and only 2 people showed up, himself and Queen of the Brood. They are meeting to discuss how they should divide up the Galaxy.

We see the newest member of the Guardians of the Galaxy, The Thing from the Fantastic Four, floating in space, being pursued by a Chitauri warworm ship. Thankfully, the other Guardians show up and blow them away thanks to Star-Lord, aka Kitty Pryde, phasing through the ship. Peter Quill is now King of Spartax and is busy attending royal meetings, so his fiance Kitty gets to have all the adventures and continue the outlaw name Star-Lord in his stead. I think Kitty got the better end of the deal, Peter thinks so too.

The Guardians back on the ship have a Chitauri artifact Ben stole a few pages back and are deciding what to do with it. Ultimately, they decide to bring it to Spartax and have the scientists there take a look at it. They arrive in time to see Peter fending off the unwanted advances of some alien who desperately wants to mate with Peter. As Peter and Kitty discuss what happened and the gift she brought, something falls from the sky. It is Gamora. She is badly hurt and is saying that the Destroyer of Worlds is here. Then we see the Destroyer herself, Hala the Destroyer of Worlds to be exact. TO BE CONTINUED…

I was leery when I saw Star-Lord was female, then I saw it was Kitty and didn’t mind. It makes sense really. Peter has to be a King since his real dad went crazy. I love the addition of The Thing to the Guardians and Venom is an… interesting touch. Not one I would have thought was Guardian material, but who really is? Half the team is full of criminals and assassins. Why not a symbiote monster that eats everything? I am also loving the art style of the comic. It reminds me of the first comics I read as a kid, but sharper. Very nice. Until next time!