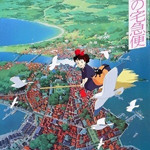 Kiki’s Delivery Service (written, directed, and produced by Hayao Miyazaki) is one of my favorite Miyazaki films, next to Howl’s Moving Castle. As there are three different voice cast versions out there, the movie we are referring to is the English Disney voice cast starring Kirsten Dunst, Phil Hartman, Tress MacNeille, Janeane Garofalo, Matthew Lawrence, and Debbie Reynolds. Did I mention I love this cast? Kirsten Dunst plays Kiki, a 13-yrs old witch who left home to train as a witch in the ever-lovely Koriko. Koriko is a beautiful port city bustling with life and lush backgrounds. Kiki travels with her familiar Jiji, voiced by Phil Hartman. She obtains work in exchange for lodgings and a base of operations for her delivery business at a bakery run by a very pregnant Osono (voiced by Tress MacNeille) and her giant, but kindly, husband Fukuo (voiced by Brad Garrett). While on her many deliveries she meets a few colorful characters.

Janeane Garofalo lends her voice to Ursula, a free-minded artist who becomes a close friend of Kiki’s. In the second half of the movie she advises Kiki when she loses her powers and ability to communicate with Jiji. Matthew Lawrence voices Tombo, an aviation enthusiast whose friends and his own forward and overly-friendly manner annoys Kiki. Until he takes her for a ride on a flying bicycle he built. She is able to regain her powers in time to save his life after a terrible airship accident. One of my favorite characters in the whole movie, saved for last, is voiced by Debbie Reynolds. She is simply referred to as Madame and is an old, kindly grandmother Kiki does a few chores for and helps bake a pie for Madame’s ungrateful granddaughter. Kiki later delivers the pie, her purpose for being there in the first place. I love how easily Kiki and Madame get along. It is almost familial. As of they have known each other for years. Madame’s roommate is hysterical. The scenes of her trying to ride Kiki’s broom are adorable.

The movie ends with Kiki writing a letter to her parents, whom we briefly see at the beginning of the film. She assures them she is doing well and is happy in her new home. A sweet ending to a lovely film. It is great for the whole family, but Captain Little Dude got bored. There wasn’t enough music and fast movement for him.