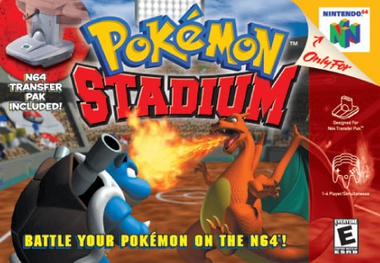 Pokémon Stadium is a strategy video game developed by Nintendo EAD with the assistance of Creatures and HAL Laboratory and published by Nintendo for the Nintendo 64 video game console. It was released on April 30, 1999 in Japan, February 29, 2000 in North America, and April 7, 2000 in Europe. Though known in Western regions as Pokémon Stadium, the game is actually a sequel to the 1998 Pokemon Stadium (ポケモンスタジアム Pokemon Sutajiamu?).

Pokemon stadium is easy to pick up and learn to play, however it can take much longer to perfect ones technique. Being a battling game, it can also get quite tedious after a while. The mini-games are fun, but after a while they to get tedious.