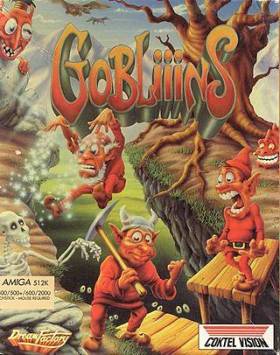 A voodoo doll has turned King Angoulafre mad. You control a team of three Goblins – Oups, Ignatius and Asgard (Hooter, Dwayne, and BoBo in the US release), who must find four magic components to track down Niak the Wizard, who is the only one who can put things right. They all have different skills – one can cast powerful but erratic spells, another can collect and use objects, and the last can hit things. You switch between them to solve puzzles in this point-and-click game. The game is linear and consists of 22 levels, each of which occupies a single screen. The puzzles on each level must be successfully solved in order to progress to the next. Several actions may harm the goblin involved, including leaving them in an unsafe place, using incorrect items, or interacting with items with the wrong characters, thus reducing their shared life meter. If the meter runs out, the game ends in defeat.
The French have a very distinct art style and Gobliiins is absolutely exuding it from every crack. The first thing you’ll notice about Coktel Vision’s game is that it is an exquisitely drawn game. The character sprites are simple but in motion everything animates brilliantly, with each character’s interactions with the world and other NPC brought to life with such gusto that the world and its inhabitants have a real sense of place. Its this excellent craftsmanship that allows its humor to really shine through.

Check out my Twitch channel for Schedual of upcomming streams.