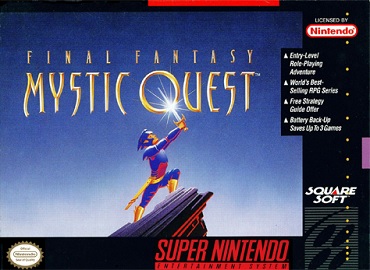 The planet is dying. Cold winds blow. Fires rage. Trees are withering. In other words, it’s brutal out there. Only you can stop the Dark King from consuming the light from the Crystals of Earth.
Final Fantasy Mystic Quest is a role-playing video game for the Super Nintendo Entertainment System. The game was released as a spin-off to Square’s popular Final Fantasy series of video games. Final Fantasy Mystic Quest was first released in North America in 1992 and marketed as a “simplified role-playing game…designed for the entry-level player” in an attempt to broaden the genre’s appeal. The game’s presentation and battle system is broadly similar to that of the main series, but it differed in its inclusion of action-adventure game elements.
The graphics are decent, nothing special compared to other Super Nintendo games. The music is actually pretty good. It’s just a shame that the good music was overshadowed by an otherwise poor game.
The story line was pretty basic with little character development and was very, very linear.
Overall, on a scale of 1 to 5, I would give this game a 2.5

I didn’t record the battle grounds or a lot of the grinding. The videos mainly show off the story.

© 2004 – 2021 Temple of the CyberMage Inc.
This work is licensed under a Creative Commons Attribution-NonCommercial-ShareAlike 4.0 International License.